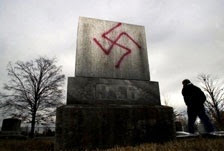 January 2001 - Springfield, Missouri - Fifty-four graves in the Jewish cemetery were painted with red swastikas, but the vandals were not apprehended.

June 2001 - Springfield, Missouri - Maurice Wilson, a Black man with a white girlfriend, was taunted with racial slurs and stabbed three times by a gang of 15 skinheads wearing swastika tattoos and Aryan Nation T-shirts. The police were not sure if this was a hate crime, and Wilson decided not to testify.

August 2002 - Springfield, Missouri - Dominic James, the two-year-old son of a Black father and a white mother, was placed in a white foster home by the Department of Family Services. DFS ignored pleas from Dominic's biological father that his son was being abused, and Dominic was shaken to death by his white foster father. Under pressure from many irate parents, the Governor investigated DFS, but then refused to sign the Dominic James Foster Care Reform Act.

September 2002 - Bolivar, Missouri - Rocky Davisson, 31, was tied to a tree and brutally beaten to death. Authorities believe the murder is related to the meth problem in southern Missouri, "the front line of the nation's War on Meth." Polk County Sheriff Parson said, "There are big, sophisticated [meth] operations that we're not catching."

October 2002 - Springfield, Missouri - Leonard Gakinya, 27, a Black man from Kenya, was found hanging from a radio tower. The hanging death was immediately ruled a suicide, despite evidence to the contrary. Gakinya had a large bruise on his forehead; he was wearing new gloves that didn't fit him; his bike and backpack were missing; and the tower is difficult to climb and an unlikely place for a suicide. Springfield conducted a physical autopsy and a "psychological autopsy," both of which have flaws and inconsistencies. (See News for more details.)

April 2003 - Lake Timberline, Missouri - Dr. Debbie Harrell, a Black educator, was cursed, threatened, and deprived of her rights as a homeowner. The Homeowners Association repeatedly called Harrell "n*gger." Instead of protecting Harrell, the police violently arrested and incarcerated her. Now Missouri is prosecuting Harrell for "resisting arrest."

August 2003 - Lake of the Ozarks, Missouri - Dr. Ramona Miller, a physician and member of the Greene County Medical Society, was violently arrested and incarcerated for a "traffic violation." Apparently, the police were upset that Miller has evidence of official misconduct. Now Missouri is prosecuting Miller for "resisting arrest," instead of prosecuting the police who abused her. (See News for more details.)

October 2003 - Springfield, Missouri - The U.S. Medical Center for Federal Prisoners is biased against Black prisoners and Black volunteers. Ronnie Dean, Pastor of the Silver Springs New Hope Church, documents the bias and asks the Federal Bureau of Prisons to investigate, but he gets the run-around. Pastor Dean, who is originally from Georgia, says that Springfield is one of the worst Jim Crow towns he's ever seen.

January 2004 - Barry County, Missouri - A former Barry County Prosecutor will serve as Senior Legal Advisor to the Coalition Provisional Authority in Iraq. In 1995, this same prosecutor participated in an anti-Semitic kangaroo court that concealed evidence of arson intimidation, telephone death threats, and courtroom harassment against Jeff and Mary. Hopefully, the reconstruction process in Iraq will be more successful than Reconstruction in the Ozarks.

January 2004 - St. Louis Post-Dispatch - 1) Missouri leads the nation in meth labs; 2) the meth labs are concentrated in the "meth belt," a band of 43 counties in southern Missouri, south of Interstate 44; 3) many Missourians are addicted to meth; 4) the image of moonshiners as paranoid and angry is an apt description of Missouri's many meth cooks; 5) meth is sold by cooks, dealers, and even some small-town police officers; 6) southern Missouri has many unreported meth killings, and "the hills are full of bodies." Are you sure you want to vacation in southern Missouri?

February 2004 - St. Louis Post-Dispatch - 1) Missouri is the center of the meth epidemic; 2) Missouri accounts for 15 percent of all meth-lab discoveries reported to DEA; 3) the governor of Missouri favors treatment and prevention, while the attorney general of Missouri favors harsh penalties and a prison reserved for meth offenders. Why doesn't Missouri prosecute and incarcerate corrupt public officials who protect drug traffickers? Is Missouri's War on Meth a microcosm of America's War on Drugs? Perhaps Missouri's phony War on Meth and America's phony War on Drugs help to explain the Meth Belt's de facto kudzu of corruption.